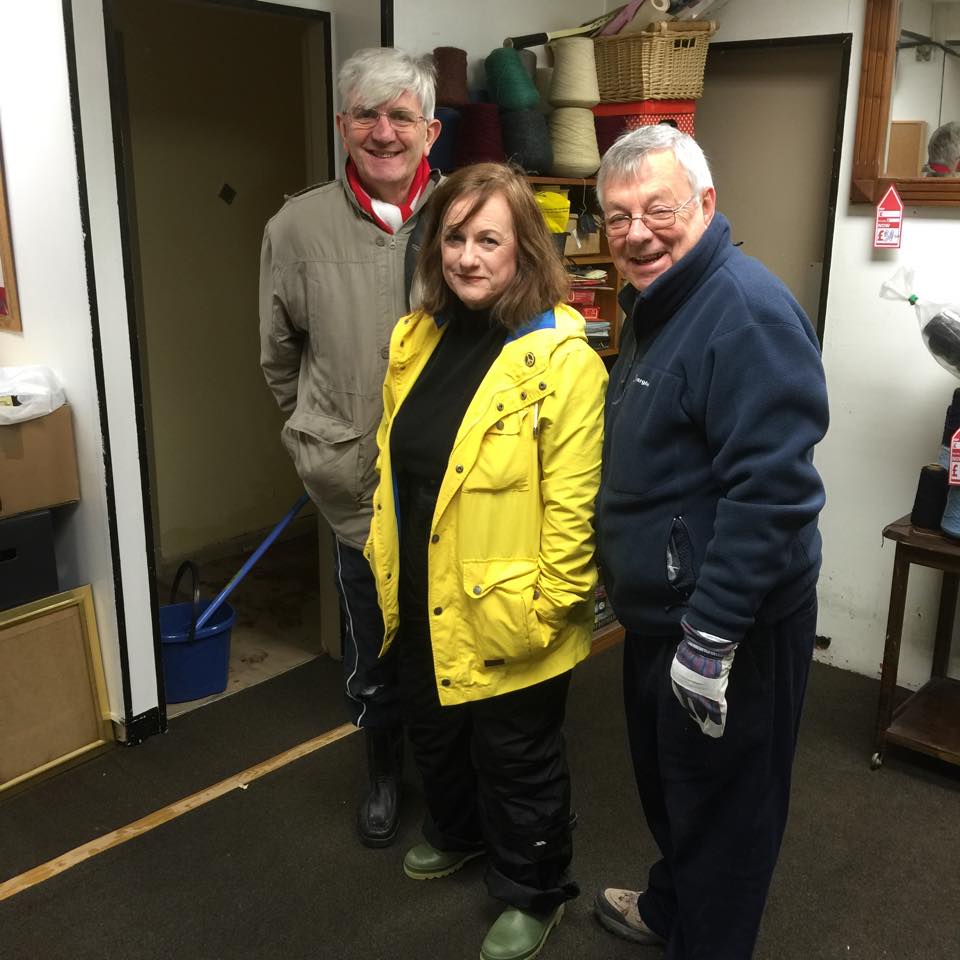 Joan McAlpine MSP joined concerned citizens cleaning up Whitesands on Ne'erday in response to an appeal from local woman Tina Duncan to help businesses affected by the devastating floods.

The SNP member for the South of Scotland joined a team of volunteers at 9.30am on New Year’s Day after Ms Duncan put out the appeal through a Facebook group called Help for Local Businesses in Dumfries.

The local Tesco branch at the Peel Centre donated cleaning materials to the volunteers who included leading members of the Rotary Club and Dumfries People's Project as well as concerned individuals. The volunteers helped Kaseem Saleem and his family clean out their restaurant on the Whitesands, which had not yet opened, as well as charity shops including Nithsdale Furniture Project in the Vennel and Brewery Street.

Joan brought shortbread and served cups of tea to the clean-up team as well as mopping up the dirt. She was joined by local nurse and former parliamentary candidate Emma Harper and her husband Robertson Wellen. Others responding to Tina's call were Dumfries Rotary Club members Ian Jess, Tom Marchbank and John Glover, Mark Jardine from the People's Project and local nurse Anne Wilkinson.

"Taking up bucket and mop to tackle the mess was a great way to begin the New Year.

"It was a great initiative by Tina Duncan and the community response was impressive. Special mention must be given to the Rotarians John Glover, Ian Jess and Tom Marchbanks - the Rotary are known for their fundraising but this response shows they are also very hands on in their approach.

“There was a lot to do. The television coverage shows the immediate flood but the aftermath is worse, with every surface and crevice covered in a thick coating of muck.It all has to be disinfected as well as dried out.”

"The yard behind Kaseem's restaurant was strewn with muck and debris brought in by the flood.

“After we alerted the council workers they transformed the place and unblocked all the drains."

The Scottish government has allocated an additional £3.94 million to directly help individuals and businesses affected by flooding in Scotland, . This money will be distributed through local authorities with Dumfries and Galloway receiving £700,000. Ms McAlpine has urged Dumfries and Galloway Council to make it clear how affected individuals can apply for these funds. She said:

"This additional money for individuals is a new initiative, unveiled by John Swinney in his December budget. It’s important that local people know about it and know how to apply for it.”

Ms McAlpine also responded to a call by Scottish Labour that money for flooding should be ring-fenced by the Scottish Government rather than allowing priorities to be decided by local councils. She said:

"The SNP gave local councils the power to decide how flood money was spent. Now Labour's environment spokeswoman Sarah Boyack has called for that spending to be "ring-fenced." In other words they want decision making to be taken away from councils. This suggests a double standard when they talk about loss of local control.

"Many of the flood defences already built did not offer adequate protection. Before we build new ones, we need to know that they will work and that they have community support."

Pictured: Joan with Ian and Tom from Dumfries Rotary Club.