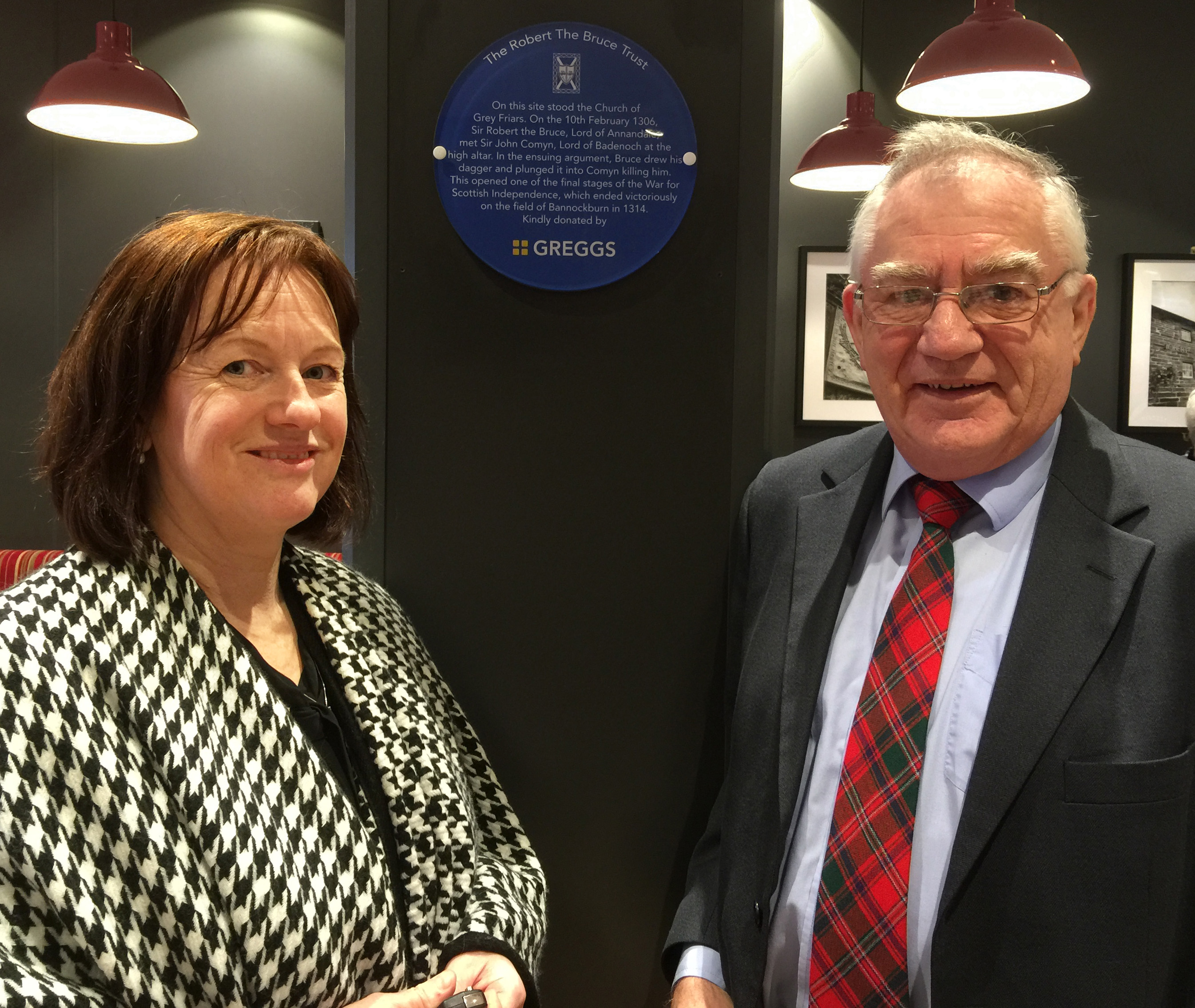 Joan McAlpine MSP has congratulated Greggs bakery for responding in record time to her appeal that their new Dumfries shop be recognised as a key site in Scottish history.

Ms McAlpine wrote to Greggs chief executive after the Robert the Bruce Trust told her the new restaurant and shop would open above the alter of the medieval Grey Friars church where Robert the Bruce stabbed the Red Comyn, sparking the Wars of Independence.

Greggs responded immediately to Ms McAlpine's intervention, designing a plaque and interpretive panel in collaboration with the Dumfries based Robert the Bruce Trust and its expert Ted Cowan, emeritus Professor of Scottish History at Glasgow University.

On Friday the SNP MSP joined Professor Cowan, Ian and Margo McClumpha of the Trust, Greggs staff members and local dignitaries to unveil the plaque and celebrate the opening of the new shop and restaurant in Burns Square.

"I warmly congratulate Greggs for their response which will give visitors a focus and educate people about the dramatic events that changed the course of history. The Bruce Trust approached me with concerns last year when they heard Greggs were taking over the store which sits where Robert the Bruce murdered the Red Comyn. They had unsuccessfully tried to buy the building from its owners, a charitable trust who leased it to Greggs. I wrote to Greggs Chief Executive and was delighted when they responded so positively to my letter and agreed to work with the Bruce Trust to commemorate the events which took place here 710 years ago. The panels look great and so to do the photographs of local scenes. "

The murder took place on 10th February 1306 when Robert the Bruce stabbed Sir John (Red) Comyn, his rival for the throne. It is said his brother in law famously finished off the deed crying "I'll mak siccar" Bruce effectively became an outlaw and drove out the occupying forces of the English King.

An archaeological dig on the site of the store in 1902 by the Dumfries and Galloway Antiquarian Society found what was widely agreed to be the altar stone that Bruce and Comyn would have been standing close to. Two skeletons were also found close to the stone but not touching it, and they were thought to be that of Comyn and his uncle who accompanied him.

The commemorative plaque in Greggs reads:

"On this site stood the Church of Grey Friars. On the 10th February 1306 Sir Robert the Bruce, Lord of Annandale, met Sir John Comyn, Lord of Badenoch at the high altar. In the ensuing argument, Bruce drew his dagger and plunged it into Comyn killing him. This opened one of the final stages of the War for Scottish Independence, which ended victoriously on the field of Bannockburn in 1314."

Ms McAlpine said she would continue to support the Trust's Campaign for a Bruce visitors centre close to the site. Historic Environment Scotland sent an expert to inspect the site and meet trust members last year at her request.

Pictured: Joan with Ian McClumpha of the Bruce Trust.