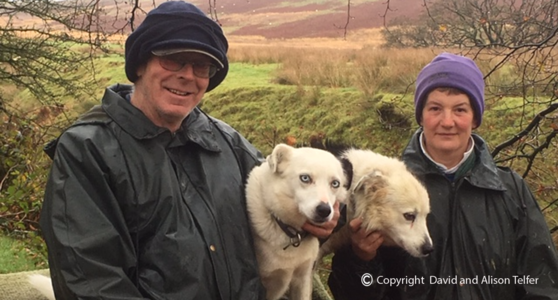 SNP MSP Joan McAlpine has welcomed the news that an online petition in support of Alison and David Telfer, a farming couple threatened with removal by the Duke of Buccleuch, has received over 8,000 signatures.

Ms McAlpine has campaigned on behalf of the Telfers who face removal from their Cleuchfoot farm near Langholm by Buccleuch Estates.  Buccleuch, the landowners, stand to benefit from lucrative forestry grants either directly or via an inflated price for the land, which has been put up for sale.

This pursuit of profit comes at the expense of the Telfers, who have lived and worked at Cleuchfoot for 20 years.  The couple understood that they could farm the land until they retired in a few years time but the early sale of the holding will leave them homeless.

The sale of Cleucfoot is part of the larger disposal of the so-called Evertown Portfolio – a 9,000 acre rural estate being marketed by Savills for the Duke of Buccleuch.

The online petition, addressed to the Duke, entitled ‘Let the Telfers keep their home and business’ has received 8,645 signatures at the time of writing.  It has been posted on the website of political activist organisation 38 Degrees.

Last month, First Minister Nicola Sturgeon, in response to a question from Ms McAlpine, outlined her concern over the case.  Ms Sturgeon pointed out that the Telfer’s human rights had to be considered.  Andrew Thin, chairman of the Scottish Land Commission, has also appealed to the Duke to let the couple stay till they retire.

“Buccleuch’s treatment of the Telfers has been abhorrent.  The public are angry and this petition shows that.”

“It is lamentable, in 2018, that a Duke is trying to ride roughshod over a hardworking and honest couple.

“The Scottish Land Commission has made clear that Buccleuch Estates have behaved entirely unreasonably.  It is time they do the right thing and simply allow the Telfers to retire in peace.

“As the First Minister pointed out, we have to consider the couple’s human rights.  Buccleuch own the land and this sale is not illegal.  But it is immoral and this case does not represent a fair balance of rights.

“I will continue to campaign on behalf of the Telfers and any other tenant who is treated in such a dismissive and damaging way.”

Ms McAlpine noted that Buccleuch, this week, approached members of the community about the Evertown sale – after the MSP had pointed out that their failure to formally engage local residents affected by the sale was in breach of Scottish Government guidelines.  She said the consultation came too late as the land had already been put on the market.

You can lend your support to the petition here: