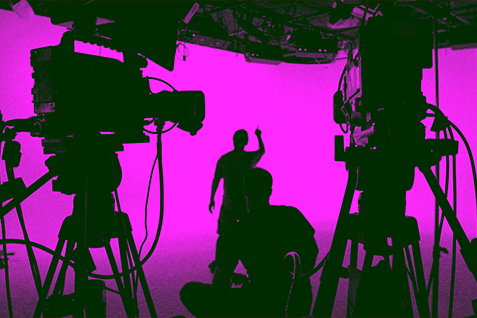 Scotland could be a world leader in film and TV production MSP Joan McAlpine told parliament this week.

However, we need more studio space to capitalise on the opportunities offered by Netflix, Amazon and other streaming services, she told Holyrood.

Ms McAlpine, who is Convener of the Scottish Parliament’s Culture, Tourism, Europe and External Affairs Committee’s (CTEEA), was leading a debate on the Committee’s report:  Making Scotland a Screen Leader.

It was the culmination of a six-month enquiry which heard from over 50 industry stakeholders.

As well as demanding the delivery of a studio, the report, which was published in June, recommended a standalone screen agency for Scotland and said that the BBC and other public service broadcasters should commission more productions from Scottish companies.

Ms McAlpine told MSPs of her optimism for the future of the industry and pointed to Outlaw King, the £85m movie about Robert the Bruce, backed by Creative Scotland, as an example of what can be achieved.  She welcomed the extra Scottish Government funding for film production which has seen investment grow by 200% over a decade.

But she pointed out that film production spend had grown around the world and witnesses to the Committee believed that Scotland was not doing as well as it could.

In her speech, Ms McAlpine said:

“The worldwide demand for high quality screen content is insatiable.  Netflix alone is making 40 productions in the UK this year out of 700 around the world – an investment of £8 billion. We need to attract more of this type of investment, but time and again our enquiry heard that Scotland had fallen behind other parts of the UK.  So, while we are growing, we are not growing fast enough

“The government, its agencies and important commissioners such as the BBC must recognise the significance of the overwhelming industry support for the Committee’s recommendations.

“The Committee visited Northern Ireland Screen in Belfast. It has been instrumental in supporting the delivery of a film studio and attracting Game of Thrones. It was completely industry focussed and of course, independent.

“Screen Scotland has now launched, albeit later than planned. Its governance seems to have been streamlined and recent appointments have bolstered industry experience at board level.

“There are many reasons to be optimistic about the future of the Scottish Screen sector but it’s important that we build real momentum and bring about a sustained and transformative change in the way the sector is supported.”

Since the Committee launched its report at The Edinburgh International Film Festival in June, a new Screen Unit, Screen Scotland, has been launched within Creative Scotland.  Ms McAlpine said that the Committee’s interim report, which called for an industry lead standalone agency, had helped shape Screen Scotland for the better.  She said it was more streamlined than originally planned and welcomed the appointment of industry professionals to the board.

However, the MSP stood by the Committee’s demand that Scottish Enterprise improve its support for screen businesses. The Committee wants to see some of the agency’s creative industry budget transferred into a standalone screen unit that would offer tailored business support to film and TV companies.