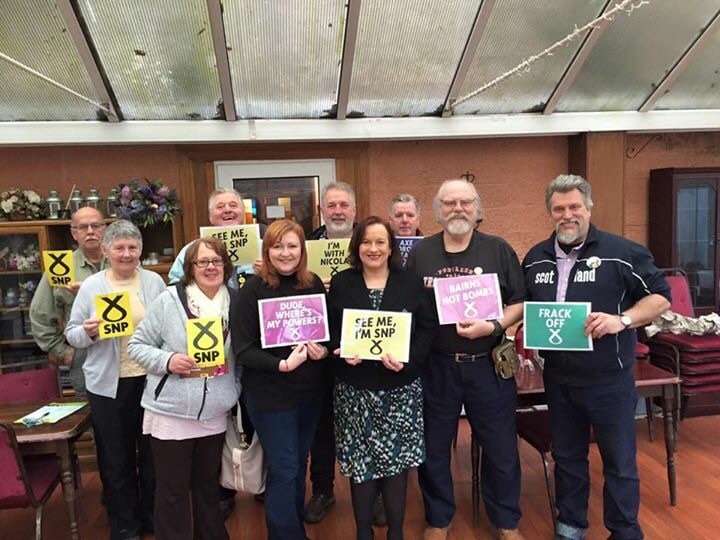 MSP Joan McAlpine was joined by SNP activists across Dumfriesshire to kick start the party’s campaign ahead of the Holyrood election in May, with a pledge to keep Scotland moving forward – building on the party’s record of success in government with an ambitious programme for the future.

On the first national ‘Day of Action’ on Saturday, activists braved the rain and freezing conditions to take the party’s positive message to the people of Dumfriesshire – including a pledge from Nicola Sturgeon to never stop working to shape a better future for the country.

The First Minister has called for the election campaign to be the catalyst for a “great, ambitious and thriving debate” about Scotland’s future – and has made clear her determination that this is a debate the SNP will lead over the coming months.

“The SNP approaches this year’s Scottish Parliament election in buoyant mood, excited about the opportunity to lead a great, national debate about how we keep Scotland moving forward.

“Since coming to office in 2007, we have made substantial progress for people in Dumfriesshire on so many issues – with NHS spending at a record high and a new hospital under construction in Dumfries, 30,000 affordable homes built, a reformed school curriculum, the Bedroom Tax mitigated and 1,000 extra police on our streets, helping crime reach a 41-year low.

“But while we have strong foundations to build on, we will never rest on our laurels and are determined to continue this progress with a bold, ambitious and progressive vision for Scotland's future.

“From investing in and reshaping our NHS to ensure it is equipped to meet the demands of the future, to setting out further action to tackle the attainment gap in our schools – the manifesto our party stands on will be one brimming with ideas to keep Scotland moving forward and to encourage a stronger economy and a fairer society.

“Over the next four months, the SNP will be leading a positive, ambitious, debate about the future of our country – not just in government and in parliament, but in every city, town, village and street in Scotland.

“And from now until election day I will be working harder than ever to speak to people in every corner of Dumfriesshire – and to secure a historic third term in office with the re-election of Nicola Sturgeon as First Minister and an SNP Government getting on with the job of delivering for Dumfriesshire and for Scotland."

Pictured: Joan with Emma Harper and other activists from Dumfries and Mid and Upper Nithsdale.