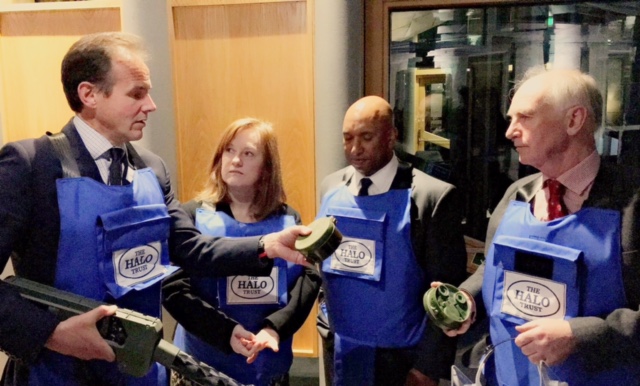 The Halo Trust, whose global headquarters are in Thornhill, is one of the world’s largest landmine clearance organisations.

Ms McAlpine opened the event before key note speeches from chief executive of The Halo Trust James Cowan and Stan Brown, a Director in the US Department of State, Bureau of Political-Military Affairs. The Scottish military historian Professor Sir Hew Strachan then opened up the event to a question and answer session.

Ms McAlpine said she was “honoured” to host the event in the Scottish Parliament.

“The Halo Trust is a remarkable organisation who clear the debris of war and make it safer for people in war-torn countries to resume their lives.

“Staff from Halo came to the parliament with war weapons and debris to show us the kind of remnants they encounter and explain the damage they cause.

“It was heart-wrenching to see this material first-hand, and really hit home the scale of the challenge faced by the organisation.

“That’s why I was so honoured to host Halo in the Scottish Parliament – everyone who came along was inspired by what they heard.”