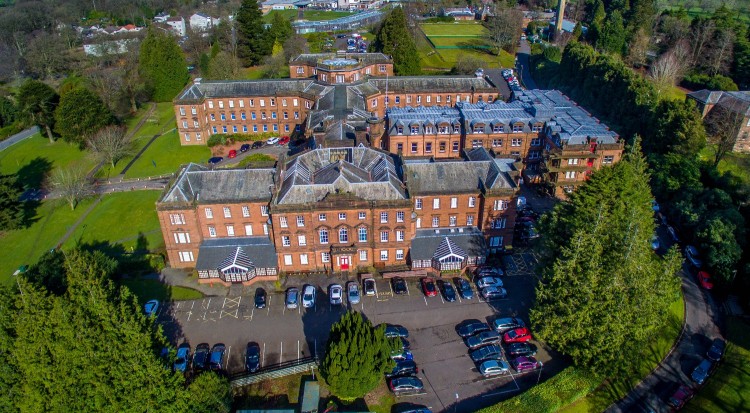 A mothballed fibre broadband network could soon go live in Dumfries after the intervention of SNP MSP Joan McAlpine.

The state-of-the-art system would turn The Crichton Estate into a “gigabit campus” and attract more jobs and investment to the area.

Ms McAlpine called a meeting at the Scottish Parliament between Kate Forbes MSP, Minister for the Digital Economy, The Crichton Trust and Scottish and Southern Energy (SSE).  SSE own the lease over the faster fibre network which was installed in 2005 but never lit up.

Ms McAlpine said she was very positive about the progress made at the meeting which she arranged after an approach from Gwilym Gibbons, the new CEO of the Crichton Trust – the charitable organisation which runs the 85-acre, business, leisure and academic campus in Dumfries.

Ms Forbes told the meeting that switching on the system would be an exciting development for the whole of Scotland as well as Dumfries and Galloway.

Mr Gibbons explained that every building at Crichton was connected to the fibre network and he outlined his belief the Trust taking control over the network would help attract new business tenants who preferred to pay for broadband as part of a single package with their utility bills.

“This was an extremely positive meeting.

“I was impressed with SSE’s candour.  They have commercial interests but they made it apparent that they will help the Trust realise its ambitions.

“The Trust has big plans for Crichton.  Now, with the help of SSE, it looks as though they will be able to take the next step in developing the campus and making it an even more attractive place to invest.

“It comes at the perfect time, as the Scottish Government is really focussed on the South, with plans for a new dedicated economic development agency.

“I was grateful to the Minister for lending her support.  She was clearly very excited by Gwilym’s vision of a gigabit campus.”

Giving her thoughts on the meeting, the Minister for the Digital Economy said:

“I thank Joan McAlpine for inviting me to the meeting to hear first-hand the ambitious vision she has for Dumfries and Galloway. The Crichton Campus already plays a critical role in the local economy and I support Joan McAlpine’s desire to see it going even further in opening up the digital potential of the south of Scotland.”

As part of the Atlas Project, a broadband infrastructure scheme funded by the EU, faster fibre-optic technology was installed in every building on the Crichton Estate in 2005.

However, the fibre broadband was never connected.  Atlas Connect Limited, a company that was setup and wholly owned by Scottish Enterprise to carry out the work, was subsequently sold to SSE in 2010.

SSE currently owns the lease to the Estate’s comms cabinet but the company has not lit up the line because in the past it was not considered commercially viable.  Other business parks that benefitted from Atlas have since prospered.

SSE will review the legal implications of surrendering their lease to the Crichton Trust.  This process should take a matter of weeks.  The ultimate aim is for the Trust to have full control over the fibre broadband connection at the Estate.  Ms McAlpine and Ms Forbes have emphasised that they will give what support they can to help smooth the transition.