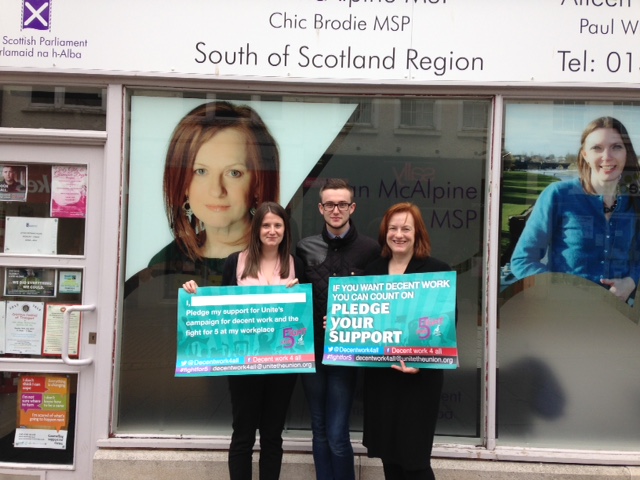 A union campaign calling for decent work for all is a great asset in the fight against low pay and job insecurity, an MSP has said.

Unite’s Fight for 5 is a campaign calling for a living wage, safe and secure work, guaranteed hours each week, training and career development – and access to union representation.

Joan McAlpine MSP, who sits on the Economy Committee in the Scottish Parliament, said that the campaign ties in well with the “work wages and well-being” inquiry currently being undertaken by the Committee.

The Committee is exploring what makes a job ‘good’ or ‘bad’, the effect might low quality/low pay jobs have on the economy as well as the health impacts of low quality jobs.

“I am more than happy to sign up to Unite’s Fight for 5 campaign.

“It highlights the need for a new, progressive approach to tackle inequality, boosting pay for our lowest paid workers through a true living wage and ending exploitative zero hours contracts.

“The Economy Committee is currently looking into the health, social and economic impacts of low pay and low quality work, and I would encourage individuals, employers, self-employed people, voluntary organisations as well as representative bodies and unions to have their say.”

Statistics published this week also highlighted the importance of union representation, showing that the vast majority of EU countries, including Germany and France, ranked best by the International Trade Union Confederation (ITUC) for workers’ rights have higher productivity than the UK.

“OECD figures also show that countries ranked highest for workers’ rights have higher productivity than the UK. These figures underline the folly of the UK Government’s plans to restrict trade union rights and strengthens the case for full powers over employment law being devolved.

“With full powers over trade union and employment policy we can work more effectively in partnership with trade unions, the third sector and business to boost growth, to increase productivity, to support employment and to deliver more and better jobs.”

The Committee will accept submissions until the 21st of August. For more details and to submit your views please visit the committee website here.

Picture: Joan with Joe McGurk of Unite and Ruth Callander.