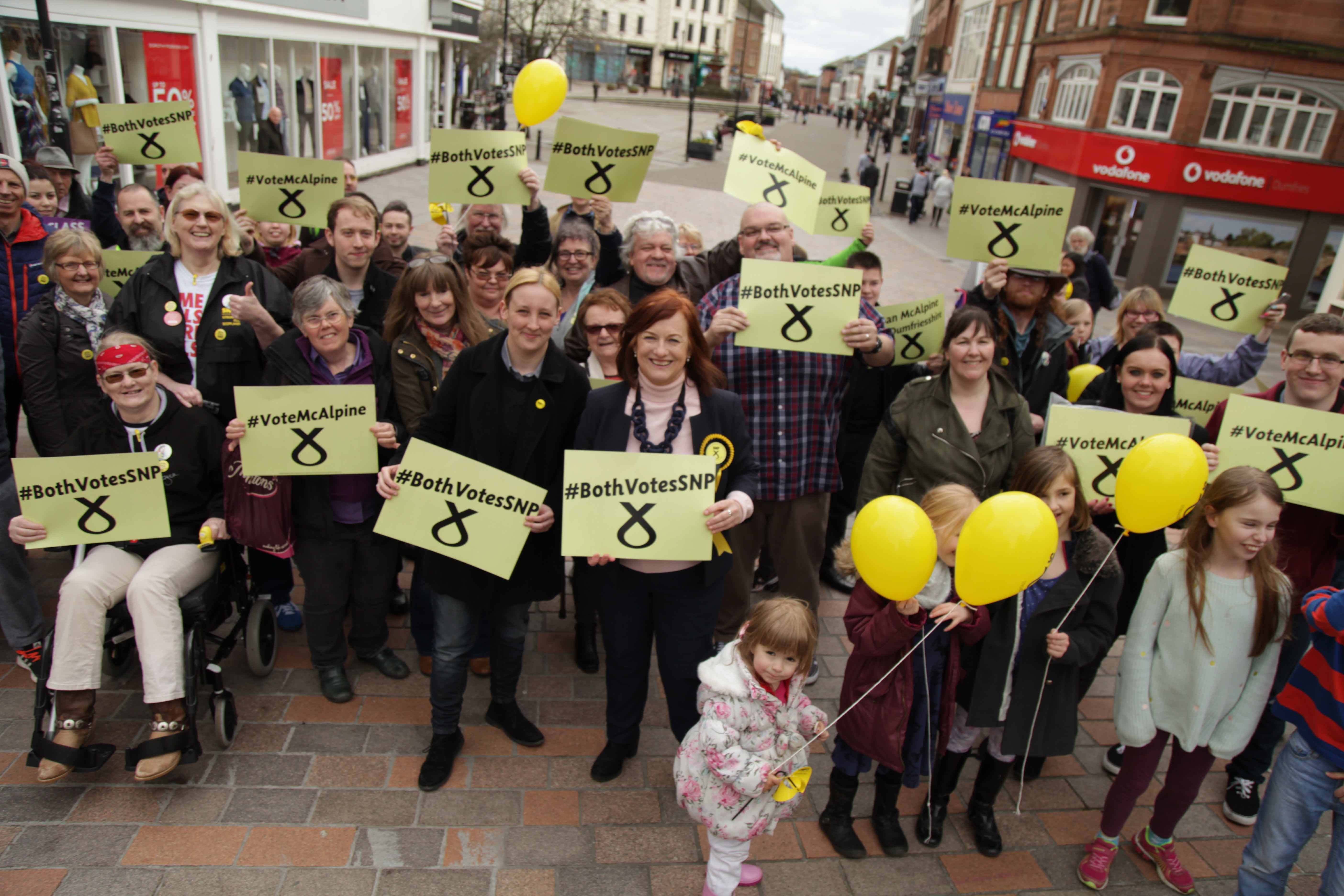 The UK’s youngest MP visited Dumfries on Tuesday to encourage voters of all ages to use their vote and engage in the democratic process. Mhairi Black MP was greeted with a warm reception as she met with various groups during her afternoon in Dumfries.

Ms Black and Dumfriesshire candidate for the SNP Joan McAlpine took part in a lively Q&A event at Oasis Youth Centre before meeting SNP supporters in Dumfries Town Centre, and they finished with a packed meeting at The Stove of WASPI women affected by the state pension age transition (Women Against State Pension Inequality).

The Westminster MP was invited to visit Dumfries by Joan McAlpine to encourage local young people to make their voice heard through the ballot box.

“Mhairi is genuinely inspirational and she spoke with conviction to local groups about the issues affecting their lives. This is a really important election because this is the first time young people have had a choice in the government that’s going to decide their future, that’s why it’s so important for them to register to vote.”

As well as encouraging young people to vote, the 21 year old MP, who is a member of the Work and Pensions Committee at Westminster, encouraged​ ​Dumfries & Galloway women born in the 1950s to formally organise to create a Dumfries & Galloway WASPI campaign group (Women Against State Pension Inequality).​ ​The group formalised overnight and have quickly established a facebook group through which to plan the development of the new organisation.

Speaking in her video blog after meeting with the boxing team, Ms Black said:

Later, reflecting on her day she added:

“I’ve had a great day. What was really good was we had a meeting, a Q&A, where we had young folk asking us questions, about both Westminster and the Scottish Parliament, and the level of questioning was fantastic. The knowledge and the intellect of the folk asking the questions really tested us, and now we’re just outside having had a similar meeting with the WASPI women which of course is an issue I’m very involved in.”

Joan McAlpine who accompanied Mhairi Black throughout her visit to Dumfries said:

“We met some fantastic young people today, young carers, young trade unionists and a Scottish boxing champion! Many of the young people we spoke to expressed concerns about cuts to local bus services and welfare reform.

“Young people in Dumfriesshire are very aware of the differences between their opportunities and those of their near neighbours in Cumbria. For example, in Scotland the SNP is protecting and extending Educational Maintenance Allowance which is abolished in England. And Scotland has free university tuition provided by the Scottish Government.

“I was pleased to be able to highlight the Scottish Government’s role in saving the Crichton Campus and building the new College building, which has meant so many young people have been able to stay in their home town to access higher education.

“Both Mhairi and myself were thrilled to see real action being taken by women affected by the state pension reforms, and the establishment of a D&G WASPI group overnight is testament to the inspirational impact of Mhairi Black.”